This song by Mike Eppley is a big hit! (Link used with permission)


The tune is charming, and it is a great way to expose young learners to early concepts of subtraction and division.

To introduce the song, I explain that to share the bananas with a friend, if we can't have the same number of bananas, you should always give your friend the bigger number (so it's a manners lesson too). 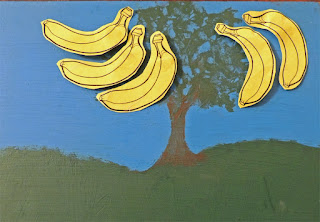 One banana fell to the floor.....
And now there are only four.

One banana fell from the tree .....
And now there are only three .

One banana went to the zoo ... (make monkey sounds)
And now there are only two .

One banana came undone ....
And now there is only one.
(At this point I stop to ask them what to do.
They already had the concept of "half" and were happy to tell me to cut it in half.)

Sometimes I'll ask the kids if there were other ways they could have shared the last banana. They loved problem solving on this question.
Posted by Kathy C at 7:05 AM No comments:

Email ThisBlogThis!Share to TwitterShare to FacebookShare to Pinterest
Labels: Songs that teach, Songs with hand motions

Over in the Meadow and the Caterpillar song

Sunshine often ends the year on a Meadow theme, just in time for the Mom's Day program.

This year we sang along with Laurie Berkner's great rendition of this favorite children's song.

The kids really enjoyed making the sound effects for this song, especially the "squeek"!

Over in the meadow in a snug beehive,
Lived an old mother bee and her little bees five.
"Buzz," said the mother, "We buzz,"  said the five,   (Hands out to sides like little wings)
and they buzzed all day in the snug beehive.

Bzzz  Bzzz  Bzzz  ("Buzzing" motion, raise hands slowly up to over the head)


And we sang this easy fingerplay song, which simply goes up the musical scale.

(Descending scale -- fast!)
"PUT AWAY YOUR CATERPILLAR!" (Both hands scurry behind back)

Both of these beautiful songs are wonderful program pieces, lend themselves to easy hand motions or sign language, and teach a worthy message.

Love Grows, One by One

Words and music by Carol Johnson
You can hear the entire recording by Kathy Reid Naiman HERE.

Because this piece is copyrighted, I will not give all the lyrics for this gorgeous song. You can find the complete lyrics HERE.

Here are the easy hand motions we are using for the chorus:

Love grows, (crossing hands over heart)
one by one  (single finger on both hands)
Two by two  (two fingers, both hands)
and four by four (etc..)
Love grows (crossing hands again)
'round like a circle (extend arms overhead in circle and opening down at sides)
And comes back knocking at your front door. (right fist taps left palm in rhythm)

The verses lend themselves to easy motions as well - keep it simple. In the second verse the lyrics suggest holding hands, and as we sing "reach for all our sisters and our brothers" we lift up our joined hands.

I nearly start crying every time.

Words and music by Pam Donkin

Pam Donkin has generously dedicated a website to sharing this wonderful song for FREE.
Find it HERE at plantingseedsoflove.com
The site also features accompaniment and karaoke tracks AND sheet music, as well as lesson plans and enrichment activities across the curriculum. AMAZING!

Other verses feature planting seeds of Peace, seeds of Song.

Chorus:
And as they grow
They overflow
In every part
Of my heart
Heart to heart
Friend to friend

Pam Donkin suggests adapting this song for children to sing the song directly to their parents by singing "YOU are planting seed of love in my heart"
See her adaptation HERE.

This song lends itself to using American Sign Language. There are video dictionaries online to help choreograph this. I recommend keeping it VERY simple.
Here's "Love" from ASLpro.com
Here's "Grow" from signingsavvy.com

Email ThisBlogThis!Share to TwitterShare to FacebookShare to Pinterest
Labels: Songs that teach, Songs with hand motions

Mr. Troll May I Cross Your Bridge?

This game is based vaguely on "Three Billy Goat's Gruff". The kids always love it!
It uses listening & creative skills, as well as taking turns and following 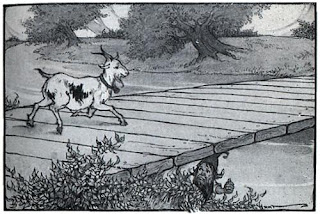 The kids line up at one side of the room, and I put out a "Bridge" in the middle of the room.

In the past I have used a low bench and held their hands for safety. This year I am going to construct something lower to the ground.

I tell them that they will have to ask the troll if they may cross the bridge.

Then we all sing (in a sing-song voice)

And I pick a child and say:

And to help them understand, sometimes I demonstrate that voice, saying:

TEACHER: "May I cross your bridge?" in that kind of voice.

The child then asks:

CHILD: "May I cross your bridge?"

After we have played the game once or twice, I usually don't need to demonstrate the voice types. The kids can also start to come up with their own funny voices.

Once they have crossed the bridge, they sit at the other end of the room while other children have a turn.

THE BRIDGE
For safety this year, I'm probably just going to use a board on the floor -- maybe with low pavers underneath if it is stable and won't flip up when stepped on.
No one got hurt in the past - this is just cautionary. Children's footwear fashions are tending towards stiff & chunky soles - not good for games requiring agility.
Posted by Kathy C at 10:40 AM No comments:

Email ThisBlogThis!Share to TwitterShare to FacebookShare to Pinterest
Labels: Games

Just before storytime, I teach the kids one new letter of the alphabet, and we practice making its sound. Then we practice saying the names of the letters we have learned so far, and finally we sing The Learning Station's ABC Phonics song - just up to our new letter.
So far this year we are up to the letter K.

They are always so eager to move on to the next letter. This week they were so disappointed they could not sing the letter L for Lion until after Christmas!

The pace is lively enough to make it fun, but not too fast. The melody is super simple. I'm always impressed how much the kids enjoy singing this; they take learning their letters very seriously. 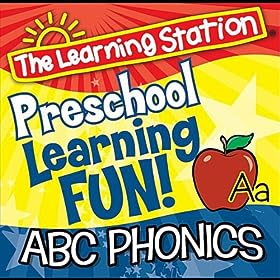 by The Learning Station

Email ThisBlogThis!Share to TwitterShare to FacebookShare to Pinterest
Labels: Songs that teach

Christmas 2015 ~ A Funny Jingle Bells, The Mitten in the Snow Song

Here is a list of all our Christmas songs this year. I don't like to teach Christmas music all through November, so if you want to help your kids learn these songs I welcome the help.

This year we are not using the "Dashing through the snow" verse,
but are singing our special Sunshine verse instead:

A day or two ago, 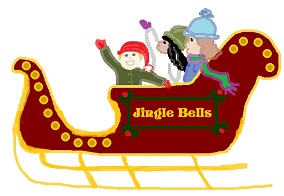 I thought I'd take a ride,
And soon my Sunshine Pals
were seated by my side.
Our horse was running fast,
as fast as he could go,
He tripped over a snowball and we all fell in the snow! OH!

The Mitten in the Snow Song

This simple song is sung to the tune of "The Farmer in the Dell",
and goes through all the animals in Jan Brett's telling of "The Mitten".
If you have a copy of this book, you can sing the song as you tell the story.

The mitten in the snow 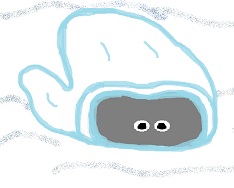 
Then for then next SEVEN VERSES it goes through all the animals who join the mole in the mitten! (For the purpose of our program, we probably won't sing every verse!)

These songs are described in last year's Christmas post (link)
Peppermint Stick
Up on the Housetop
Ring the Bells
Rudolph, the Red Nosed Reindeer

And...
Away in a Manger (first verse)
Ring those Bells and Turn Around
We Wish You a Merry Christmas
Posted by Kathy C at 4:11 PM No comments:

"Too Much Noise" and other dramatic participation stories

And that is just the beginning of Peter's troubles.
I quickly go over the sounds to make: creak, squeak, swish, & hiss before launching into the story. (Hand motions are fun too)

The children won't have any trouble helping you with the animal sounds (encourage this).

And there is a lovely, quiet resolution.

This classic story begs to be interpreted dramatically.

The children can call out the peddler's market banter.

BOTH of these stories feature an individual with a problem. As soon as it is obvious what the problem is, you can ask the kids how they would solve it.

I tell three from this one nearly every year.

To tell these stories, you'll want to memorize the basic idea, and then ad lib the actual telling.

Make it fun! When the prince goes riding to fight the wizard, make everyone bounce up & down as you call out silly obstacles  "He rode through the pizza forest!"

Over the years, my artsy daughters have created puppets to aid my storytelling, and the children love them, especially the beautiful Snow Queen.

I give the children a chance to pet my dragon puppet before I tell the story about the lazy dragon. See, not so scary.

The story about the Emperor invites exploration into all kinds of sounds: chimes, gongs, clocks, and all manner of bird songs. You could spend a whole class on this story.

And don't forget your favorite from summer camp: "Goin' on a Lion Hunt". Always works.
Posted by Kathy C at 6:33 AM No comments:

Come and Have a Seat on the Floor :) 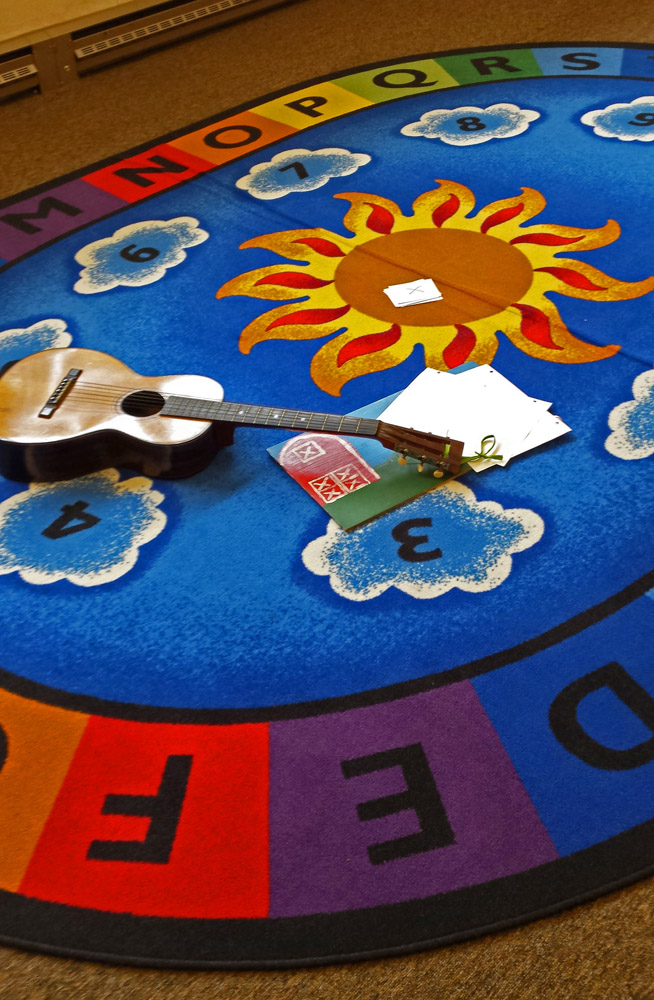